For Beyond 50's "Spirituality" talks, listen to an interview with Carole Guyett from Ireland.  Through her work in as a medical herbalist, she combines sacred knowledge of plant spirit medicine from several shamanic traditions: European/Celtic and Native American.  Guyett will talk about how you can commune with plants and their spirits through "plant dieting" (on non-psychoactive plants) which involves ingesting it over a period of time so you receive its vibratory energy as well as its medicinal actions.  Guyett will also discuss about eight ceremonial initiations that allow you to receive the plant's sacred teachings, and forge a relationship for guidance and healing. 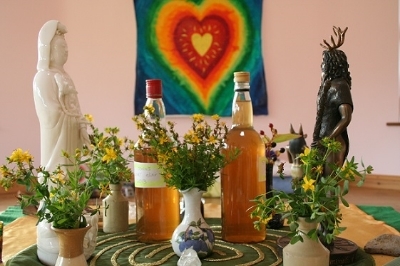 "A plant diet offers a way to develop a deep relationship with a plant – to bond, to blend, and ultimately to merge.  It is a way to honour the plants and their Dream. These are plant initiation ceremonies.

"The plants can open Gateways to Higher Consciousness and give us a direct experience of other realms and higher dimensions. Physical ingestion helps integrate these new levels of consciousness into the physical body as well as bringing the medicinal actions of the plant, " explained Guyett.

Dieting on the plant is a way of deepening your relationship with Nature and becoming more of our True Self.  It is a simple process.

You can  getting better acquainted to receive a plant's gift of healing and guidance because it is a conscious spiritual being.  This is done through by gathering, ingesting the plant elixir, dreaming with, then having hands-on experiences with the plant.

The plant initiation ceremonies are conducted at Guyett's townland in Ireland called Derrynagittah and coincide with the time of the Celtic Fire Ceremonies - involving a full fast or restrictive dieting.

"During this time we travel deeply with the plant being dieted," added Guyett.

1. Setting a Sacred Intention for your Plant Diet - This is done before the physical act of dieting.

2. Choosing a Plant to Diet - Guyett usually asks Spirit to intuitively know which plant to work with.

3. Harvesting the Plant and Preparing the Elixir - Through inner guidance from your higher self or non-physical beings like nature spirits, instructions can be received on how to harvest the non-toxic plant and then make a liquid extract of it to be ingested.

4. Spiritual and Physical Preparation for the Plant Diet - This can involve physical purification through fasting to prepare the body for three days in advance and various ways of creating focused spiritual intent, like an invocation to the Holy Spirit.

5. Carrying Out the Diet - The elixir is first offered to Grandmother Earth before ingested at regular intervals over two to three days.  It is followed by Dreaming with the plant, whether awake or asleep, entering into an altered reality to connect with the plant's consciousness.

6. Integration - You can continue to be involved with the plant after the diet through integration.  This involves working with the plant by taking in flower essences or taking a low dose of the elixir for the following two or three weeks.  Guyett also advises being refraining from sharing personal information about any profound, inner experiences from the plant ceremony within the first seventy-two hours.  The plant may want to serve as your ally and have a long-term relationship with you through dreams and chance encounters.

A Doctor's Guide to Alternative Medicine: What Works, What Doesn't, and Why