The One Straw Revolution 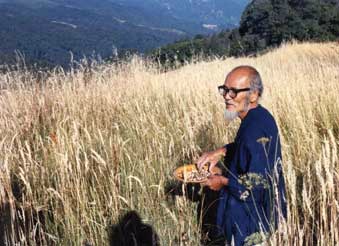 Watch Beyond 50's video book trailer on "The One Straw Revolution" that is narrated by the book's editor, Larry Korn from Oregon. In 1973, he was under the tutelage of his Sensei (teacher), Masanobu Fukuoka, who lived in Shikoku Island, Japan. Korn received a hands-on education in the art of non-cultivation and do-nothing, natural farming.

Translated in many languages, Masanobu Fukuoka wrote "The One Straw Revolution," (New York Book Reviews), a classic memoir and guide. You'll learn about his philosophy and the Four Principles of Natural Farming: no cultivation; no chemical fertilizer or prepare compost; no weeding by tillage and herbicides; and no dependence on chemicals. Even though his methods require less labor, it can result in higher yields for your farm or garden. 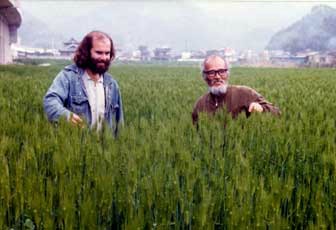 The Four Principles of Natural Farming

Observers of Fukuoka's rice fields notice that it's a rich and naturally balanced eco-system full of animal life: insects, spiders, frogs, lizards, moles and other small creatures.  As opposed to the neighboring rice fields, the animals and weeds have been poisoned for extermination.

Fukuoka has yielded more rice per acreage in an organic way by following the "Four Principles of Natural Farming":

No Cultivation - Cultivation using a plow (or other means to turn the soil) has shown to be problematic.  Through plowing, dormant seeds deep in the soil can come up for germination and sprout.  Troublesome weeds that are strong, like crabgrass and docks, can dominate the vegetation.

Nature has its own way of cultivating through the penetration of plant roots and activity of microorganisms, small animals, and earthworms.

No Chemical Fertilizer or Prepared Compost - Chemical fertilization can deplete the soil of its vitality over time.  The best fertilizer supplied by Nature is when the "organic remains of plants and animals accumulate and are decomposed on the surface by bacteria and fungi.  With the movement of rainwater, the nutrients are taken deep into the soil to become food for microorganisms, earthworms, and other small animals.  Plant roots reach to the lower soil strata and draw the nutrients back up to the surface," taught Fukuoka.

The only natural fertilizer he's applied is by growing white clover for ground cover, spreading threshed straw, and adding some poultry manure to decompose the straw by letting ducks loose to poop on the fields.

By spreading straw, it can maintain soil structure and enrich the Earth.  Other natural alternatives to make compost is scattering hulls or woodchips over the fields.

No Weeding by Tillage or Herbicides - Fukuoka has managed weeds by "timing the seeding in such a away that there is no interval between succeeding crops," he explained, and covering the whole field with straw after a harvest.  He's also found that sowing the grain with white clover is also key in good weed control.

No Dependence on Chemicals

The Secrets of Growing Giant Vegetables