"In the Heart of the Sea"
Reviewed by Joy Ramos Davis

Synopsis: Based on a true story, the Essex whaling ship set sail for a two year whaling expedition to bring back 2,000 barrels of oil, under the direction of Captain George Pollack and his First Mate Owen Chase. It became a struggle of survival against the forces of Nature and their own inner nature as they deal with a white sperm whale that was hell-bent on attacking them.

Welcome to "Conscious Movie Reviews." I'm your host Joy Davis and here to review the drama, "In the Heart of the Sea."

The Essex whaling ship of Nantucket, Massachusetts was refitted and readied with a crew for a 2-year mission to bring back 2,000 barrels of oil.

George Pollack, an inexperienced mariner upholding the family name was hired to lead over the seasoned veteran whaler, Owen Chase. This immediately set up conflicting dynamics between the ship's Captain envying the skill and popularity of his First Mate - a clash between Privilege vs. Hard Work.

Like a workplace run by toxic leadership, Captain Pollack served his own self-interest by heading straight into a sea storm, called a squall, unnecessarily. He wanted to test his men - a costly mistake that he refused to admit, even projecting the blame on his crew. 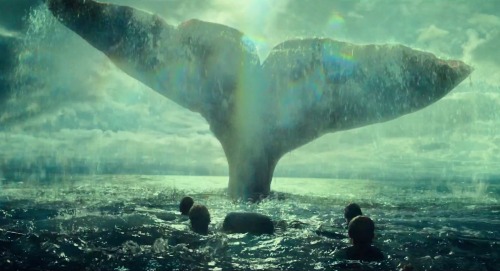 The prevailing attitude during the 1800s was that the sea is full of dark secrets and the whale a monster of the deep.

Indigenous cultures worldwide have held a curious respect, even mystical communication with the spirit of animals. When there's disrespect, the real monster are the whalers themselves, ignorant of this symbiotic relationship as they attempt to bend Nature to their human will. They've also alienated themselves from their own animal-like, instinctual desires by trying to destroy it. There are serious consequences to this kind of backward thinking about stewardship of the Earth. 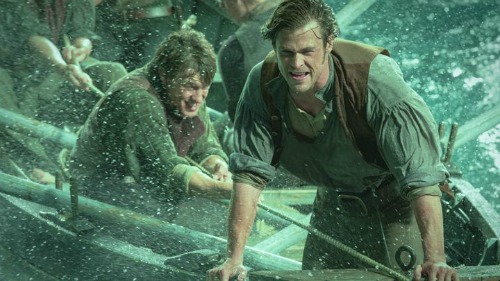 After three months of sailing in the Atlantic Ocean, the Essex changes course to the Pacific, going 2,000 miles west of Ecuador to the bountiful "Offshore Grounds." They were told by locals that there's promise of whales, but also the possibility that they'll be confronted by a hostile and albino, bull sperm whale in that area.

Following their greed and arrogance, they ignore the warning.

The massive white whale reared itself and was hell-bent on doing damage. He goes after their whaling boats and staves the ship in half, sinking it.

Whenever something unpredictable and extraordinary happens in your day-to-day life, it's to get your attention. Known as a "waking dream" they occur when you are consciously awake, it provides symbolism about yourself that can't be ignored.

For the whalers, the rare and unusual coloring of the sperm whale was to get their attention. They missed out on some obvious messages about themselves.

Based on the dream teachings of Michael Sheridan, he explains that the sea is the ultimate body of water and can symbolize your spiritual side or life itself. It has no shape of its own and can assume the shape of anything into which it's placed.

Whales are interpreted by him to mean channeling. A channel is someone who can communicate directly with spirits and angels. Whales means this because they are mammals, as are humans, but live in the ocean (symbolizing spirituality), so here we have an air breathing mammal that has adapted enough to travel into the spirit world.

Many indigenous cultures regard a white animal as a symbol of purity and enlightenment. They are sacred in that respect. Rare, white lions exist in South Africa and white buffaloes exist in the United States. Both are considered sacred by native cultures. Their presence is a fulfillment of a prophecy that good times will come through the unifying of cultures because white encompasses all colors of the spectrum.

Fending for themselves, the crew drifts on three whaling boats for hundreds of miles with very little rations. Many are starving and near death.

For their survival, they reluctantly resort to cannibalism by cutting out the heart of a crew member.

Similarly, the Iroquois of North America have been known to surgically remove the heart of a brave prisoner for eating to acquire some of his courage. This is not so farfetched, based on many testimonials from organ donor recipients who have noticed that they have acquired traits from their known donor.

After 48 days out at sea, they spot land at the tiny Ducie Island that was unfortunately, deserted and barren. Their emaciated bodies on the outer reflected the harsh, inner process they endured to have their arrogance and greed stripped away.  As an act of humility, Captain Pollack finally admitted to Chase by saying that he was "born to do this job. I was just born into it." 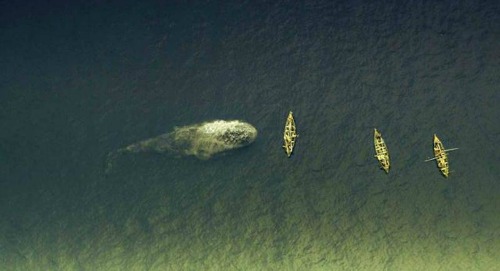 Some remained on the island to die, while others moved on. Drifting for many miles out at sea, the vengeful white whale followed them.

Chase was forced to realize that he couldn't run from another confrontation with it. This was his opportunity to integrate with his emotional "shadow" that he had feared - his own unpleasant emotions that he had bottled up. The pressure, or blind rage of the whale, is his own raw emotions become explosive that his own ego can't contain it anymore.

As he readies for attack, Chase notices a portion of a harpoon was embedded in the whale's skull, pauses and drops his defenses to let the whale go.

Spiritually, you can connect with the "over soul" or archetypal being of an animal species to understand the power or "medicine" that the animal brings you.  Chase had made the connection to go through the initiatory experience of letting his fears die - a kind of baptism by the whale. 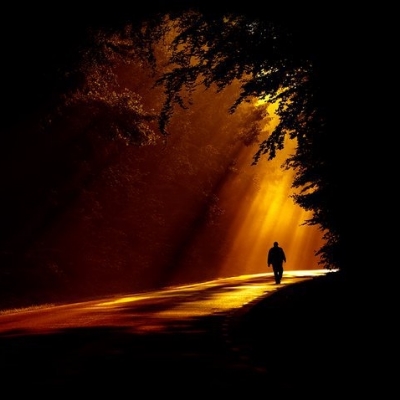 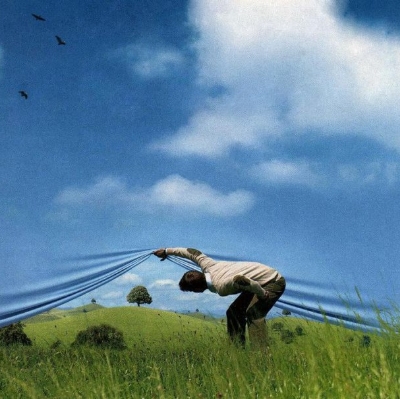