Synopsis: "Star Wars: The Last Jedi" is a sci-fi, action and adventure film. On the oceanic planet of Ahch-To, Rey is insistent that Luke Skywalker join the Resistance to offer hope in their fight against the Republic under the leadership of Snoke. He resists. Luke has become bitter and full of guilt with age, distancing himself from the Force. Meanwhile, the Rebels are having trouble making a light speed getaway, so Finn and Rose Tico devise a plan to disable the Republic's new tracker so the Resistance can escape to the nearby planet of Crait.  Luke recognizes that the Force is strong in Rey, but refuses to train her.  The Jedi Order must end.  Through a mind bridge communication set up by Snoke, Kylo Ren tries to convince Rey to join forces with him. She, in turn, was adamant about converting him away from the Dark Side.  They continue to battle it out, both physically and through their strong wills.  Another fight breaks out on Crait between the Republic and Resistance that forces the rebels into a corner. They need all the help they can get. 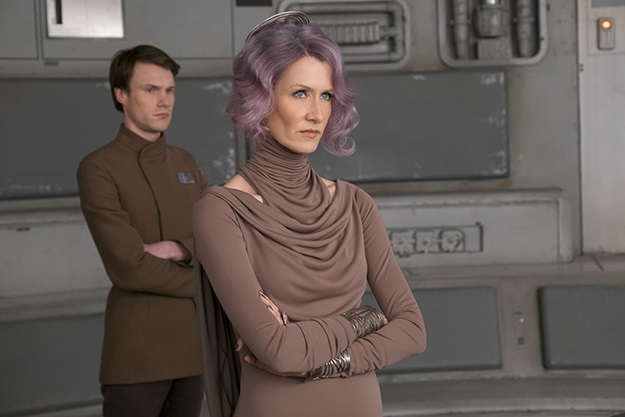 The Resistance Regroups After Heavy Losses

Welcome to "Conscious Movie Reviews."  I'm your host Joy Davis and here to review "Star Wars: The Last Jedi" - focusing mostly on the dynamics between the Jedis and leaders of the First Order.

In a fierce battle against the Resistance, Kylo Ren hesitated to shoot down their cruiser from sensing that his mother was on board.  It was the TIE fighters that stepped in to do the dirty deed.  General Leia survived the onslaught by using the Force, but was incapacitated.

As a result of Poe Dameron's impulsive counter-attack on the Dreadnought ship, 400 Resistance fighters' lives were lost. The remaining rebels were placed under the new command of Vice Admiral Holdo.  By Poe's estimation, she was a passive leader, giving him reason to challenge her authority.

The Resistance was in deep trouble with limited fuel.  They couldn't rely on jumping to light speed as a getaway move because of the Republic's new tracking device, so Rose Tico and Finn hatched a plan to sneak on board a First Order ship, and with the help of a master code breaker, disable their tracker for the Resistance to escape and establish a new base. 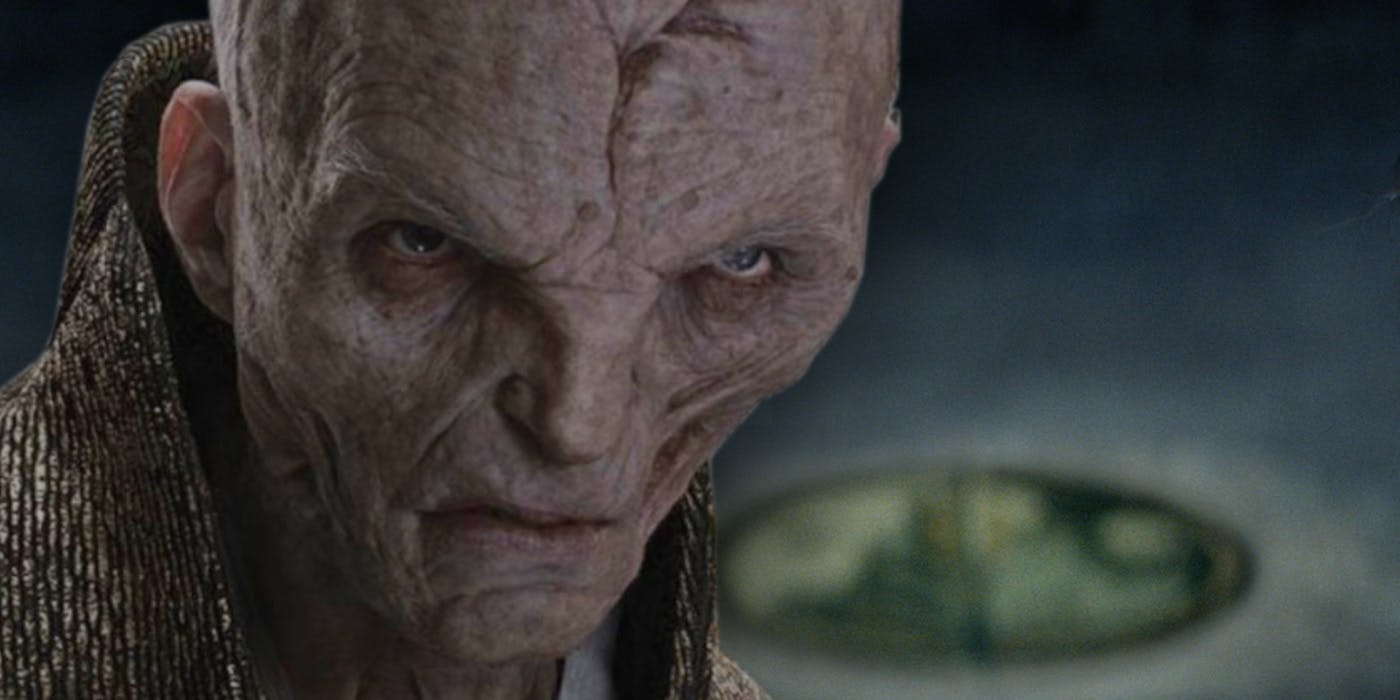 The Purpose of Evil

For failing to fire on the Resistance earlier, Snoke expressed his deep disappointment in Kylo Ren as a leader for having too much of his father's heart in him, then gave a stinging insult by saying, "you're just a child in a mask."

Born sensitive to the Force through his mother's lineage, Kylo Ren was also drawn to the dark side through his father - a shady hustler.  Han Solo wore a necklace of lucky dice that represented how he liked to take risks as a renegade.  By having a touch of evil that grew within his light being, it left Kylo Ren conflicted.

According to spiritual teacher Paul Twitchell, evil exists only as a shadow, an illusion of God's darker side of creation.  The negative forces are meant to hold us in slavery to mind and matter, while it's our duty to develop self-mastery and escape the webs of illusion to gain spiritual freedom.  The struggle through pain and suffering can makes us strong, fitting us for the journey back to our true home - the heart of God. 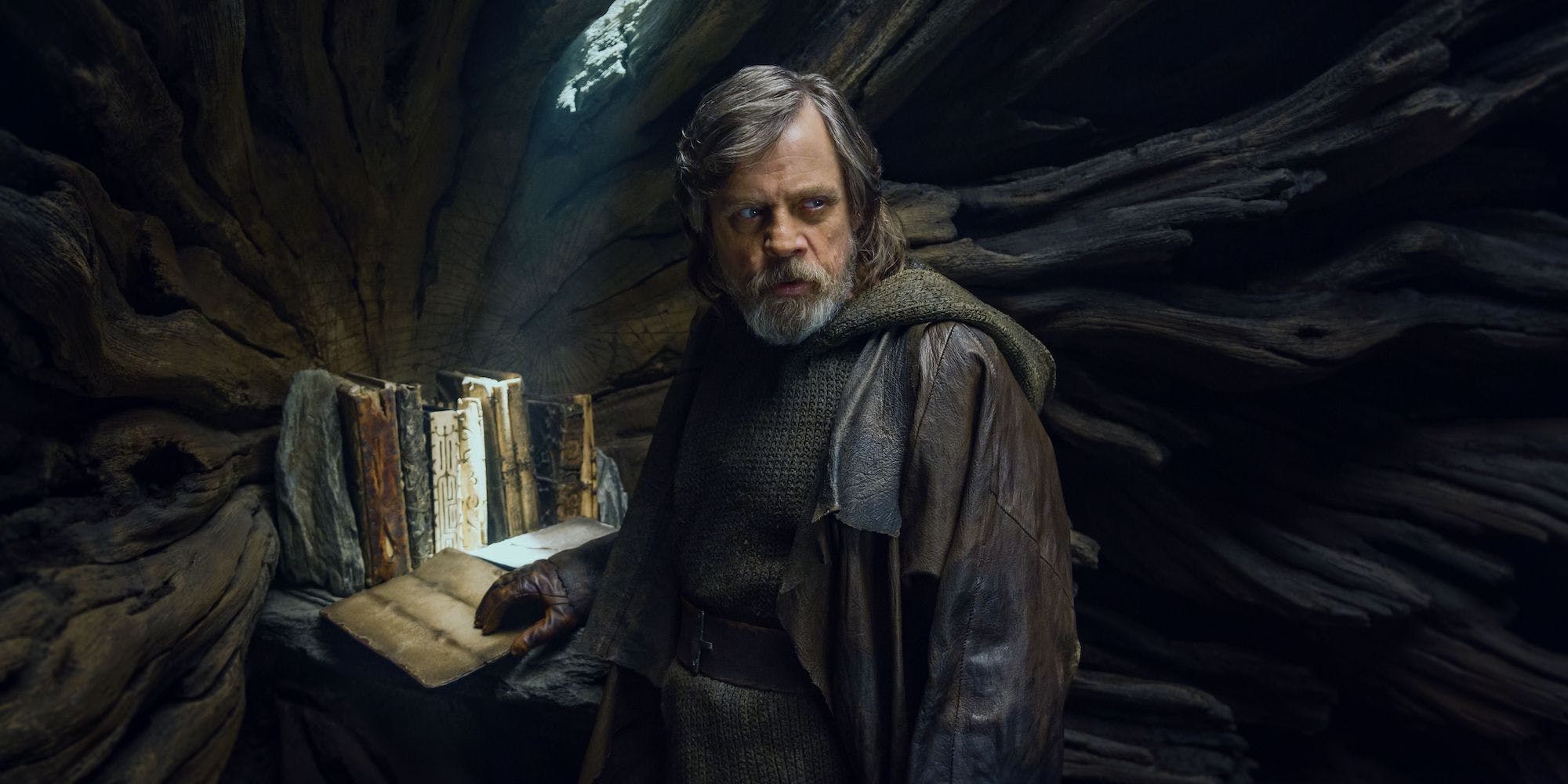 Luke Turns His Back on Rey

At the oceanic planet of Ahch-To, Rey did her best to force Luke Skywalker out of hiding and have him join the Resistance.  Her pleas were turned down by the bitter Jedi.  She was insistent by telling him, "I'm not leaving without you."

Luke's longstanding anger left him emotionally rigid to become a crusty, old man.  He ignored the Jedi practice of being totally detached about his worldly affairs for the Force to flow freely through him.  Luke is an example of how a spiritual teacher can at first achieve mastery, but it must be re-won from moment-to-moment.

During Rey's stay on the island, voices called out to her through a mist and within a cave that held the ancient texts of the Jedi Order.  The place felt familiar, letting Luke know that something inside of her has always been in there.

Symbolically, the mist can represent mystery and the exotic allure of the unknown.  Rey was aligned with the Force to perceive its subtle messages through her inner ears from being clairaudient and highly intuitive.

In an emotional reunion with R2D2 within the Millennium Falcon parked nearby, Luke was shown the original distress message from Leia years ago asking for Obi Wan Kenobi's help.  It was a fitting reminder that the path he was on was about hope in a time of crisis - helping him to realize that Rey needed a teacher.  He offered her only three lessons, but not the full Jedi training.

Luke's first lesson was for Rey to reach out to the Force through her feelings.  She received inner visions and emotionally picked up on the dualistic nature of this world being held together by the Force's energy of balance.  Beneath the island was a coldness and clawing.  Without resisting, Rey followed it into the darkness, surprising Luke.  She immediately sensed that he had distanced himself from the Force.

Rey was both clairvoyant to see and clairsentient to feel the Force at work within this world of duality that shifts back and forth between its polar opposites to resemble the Yin-Yang symbol. 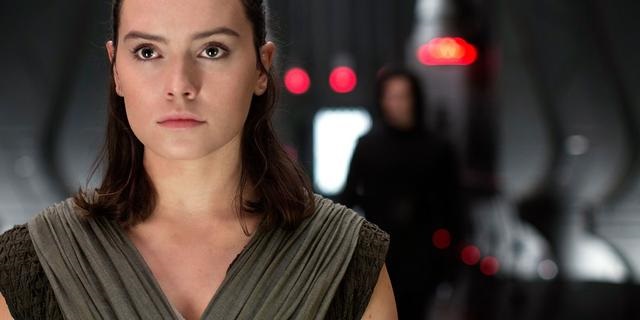 A linkup was established for Kylo Ren and Rey to see and feel each other, despite being light years apart.  She was able to view him and his surroundings better than he could.  Snoke later admitted to them that their communication was made possible through a  mind-bridge he created.  This is questionable because they maintained an inner connection, even after Snoke was cut in half by Kylo Ren's light saber.

Kylo Ren and Rey practiced a combination of remote viewing and telepathy to exchange with each other within the thought stream.  These are natural abilities we all possess, but takes a lot of practice to master Soul-to-Soul communication.

Rey was determined in converting Kylo Ren to the light, while he insisted that they rule the Empire together.  It became an all-out battle of strong wills.  Because evil is a shadow, an illusion made by the dark side of God's creation, they were really battling their emotionally reactive minds that can buy into these illusions as ultimate reality.

As a wanna-be Jedi, Rey was emotionally immature to compulsively need to be in control in a self-righteous way, the opposite of detachment.  She would not give Kylo Ren enough space to just be.  He chose self-entrapment by being hostile and neurotic.  Rey needed to learn that free men set themselves free on their own through self-forgiveness and gratitude.  He had not done this, so she already lost the battle.

During Rey's second lesson in becoming a Jedi, Luke started to teach her about "Deed," but then turned it into a confessional.  Long ago, he was entrusted by Leia to train his nephew, but failed as a master to keep the darkness from rising within the boy, causing Ben to turn on him, slaughtering half of Luke's students and burning down the Jedi temple.

Kylo Ren gave Rey his side of the story - the part that Luke failed to mention.  He was nearly murdered while asleep because Luke acted out of fear.  Killing his tainted nephew was a means to keep peace and order.  This was the root of Luke's guilt that wracked him for years.

Kylo Ren wanted to let the past die.  "Kill it if you have to.  That's the only way to become what you're meant to," he told Rey.

It never works because resisting or trying to destroy what you hold in your bad memories only gives it strength.  The trick is to welcome up the full extent of the bad feelings and keep welcoming them, including any resistance to it.  By doing this, whenever the pain arises, you're releasing the emotional charge around it.  So when you do recall the memory, you've become neutral to it - just peacefully observing the event without any judgment or feeling. 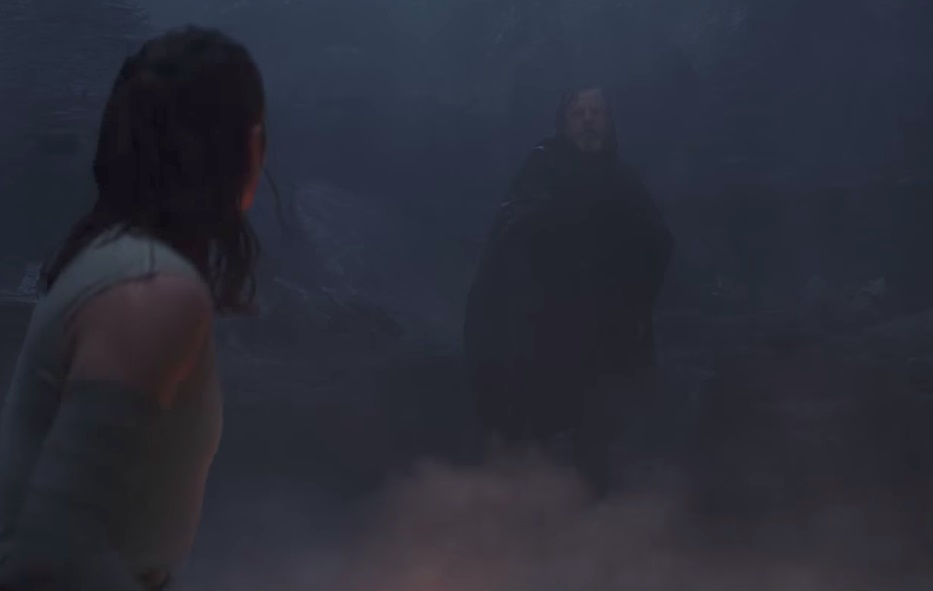 Seeing Through the Illusion

When Rey was being called to a dark hole below the island, she fell through it to find many mirrored images of herself.  Facing a dark barrier, Rey asked to see an image of her parents.  She was only shown shadows, then herself.

The scene is symbolic of how the negative force works to keep us enslaved to our world of matter, energy, space and time by mocking up illusions that our mind believes is the true reality.  Instead of seeing her parents, it was Rey's own image to reveal that everyone who shows up on your life path is for you to learn about you. 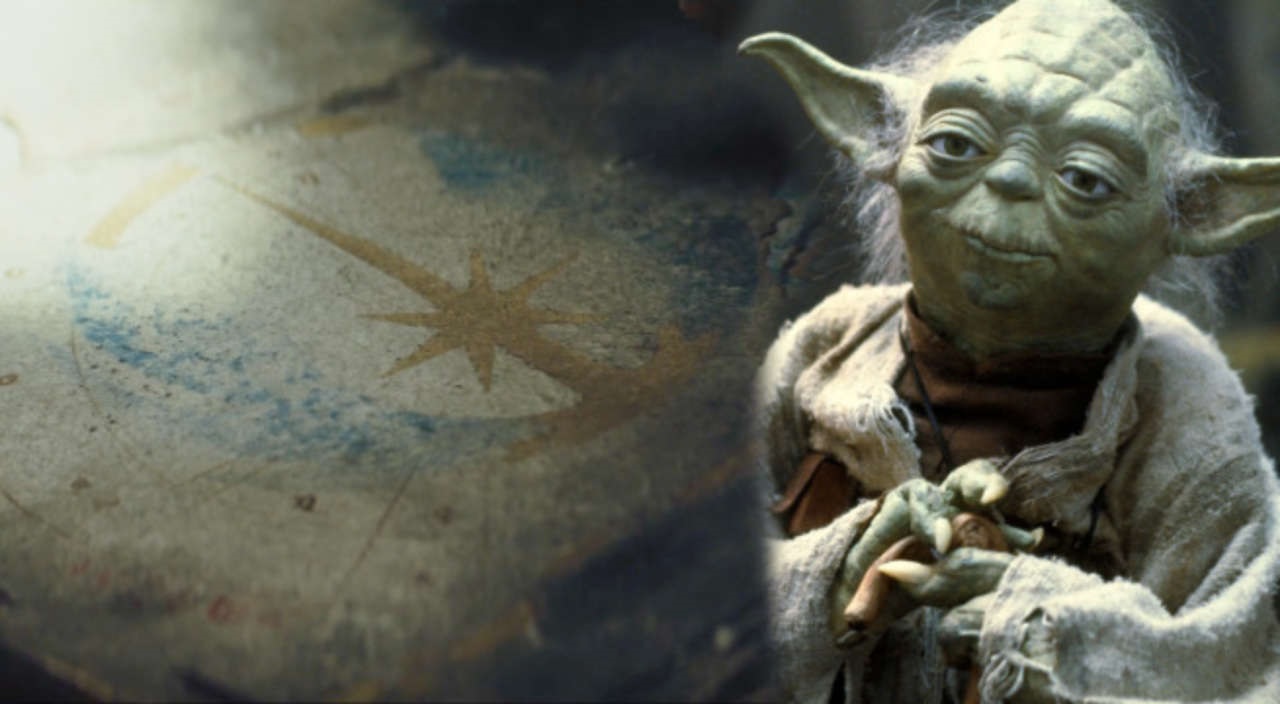 Rey confronted Luke about his past.  He admitted that when a frightened boy wakes up having to defend himself from seeing his uncle ready to strike him with a light saber, he was responsible for his nephew's dark conversion to Kylo Ren.

Just when Luke was about to end the Jedi Order by burning the sacred texts and tree, Yoda showed up in spirit to beat him to it.

This was to show that the true teachings never emphasize the form, but the formless.  Knowledge through books is important, but a Jedi Master's ultimate purpose is to link up the student to the Force - placing them on a personal path towards self-mastery.

Before leaving, Yoda imparted some wisdom for Luke's benefit by saying that "failure is the greatest teacher." 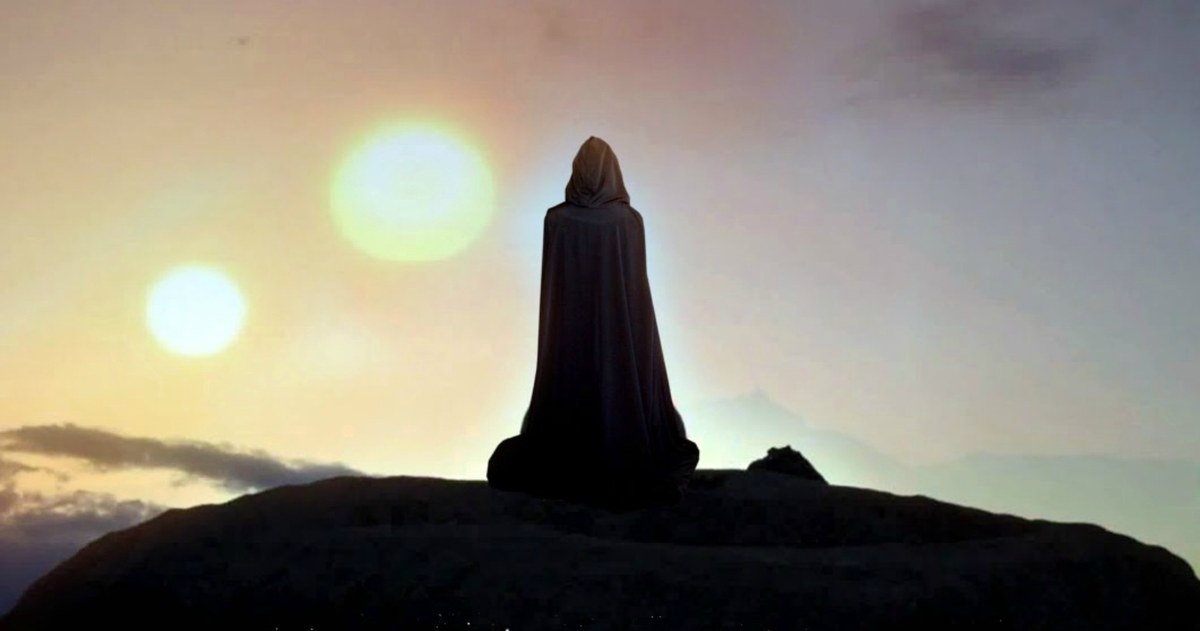 The Passing of a Jedi Master

Narrowly escaping to the planet of Crait, the Resistance prepared to defend themselves against the Republic's attack with old ski speeders.  New leader Kylo Ren and General Hux used a high beam cannon to blast away at the fortressed base to trap the many rebels within it.  Rey came to their defense with the Millennial Falcon to draw the TIE fighters away.

When Luke showed up on the battlefront to restore hope, the Republic's laser fired many rounds at him.  He remained alive and standing, so Kylo Ren challenged him to a duel.  His light saber sliced through Luke without killing him.  It was all mocked up by design - a clever distraction to provide more escape time for the Resistance.

Luke was simultaneously on Crait and levitating above rocks on his island planet of Ahch-To.  He had the ability to bilocate - physically be in two places at the same time.  This is another natural ability we can develop.  Many Catholic saints, monks, Muslim sufis and Huna shamans from Hawaii were able to do this.  Our Soul self is capable of running two bodies at the same time, one in a trance and the other actively.

In his final moments of facing two suns, Luke's body disappeared to merge with the Force, leaving behind his robe.  It was the Jedi way.