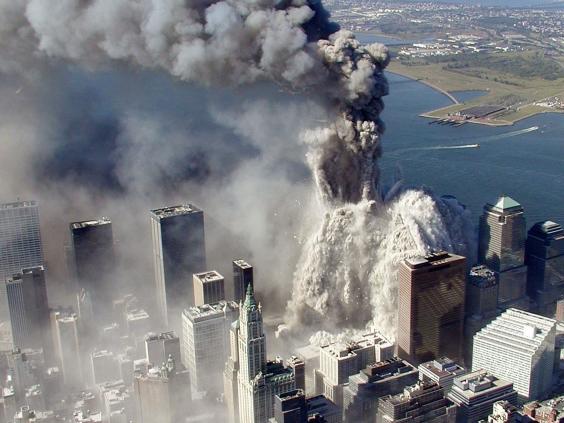 In recognition of the 9/11 anniversary of the tragic event in New York City in 2001, Beyond 50 offers annual evidence of false flag terrorism.  The facts provided reveal that the destruction of the Twin Towers building was an inside job, orchestrated by U.S. government officials in a multi-national collaboration.

Here are the latest findings through "The International Forecaster" by James Corbett:

It took President Bush an extraordinary 441 days after 9/11 to establish a commission to investigate the events of September 11, 2001. And it was not just the case that Bush was slow in acting; he actively resisted any investigation for as long as he could.

From the initial outline to the final report, 9/11 Commission Executive Director Philip Zelikow carefully guided the process, hiring and firing the staff, directing their research efforts, deciding on witnesses, scrubbing information, and shielding his former colleagues in the White House from criticism.

But perhaps more remarkable than the fact that "the fix was in" from the moment he took over the commission and began working on the predictive outline of the final report, is that he had in fact written about 9/11 and its eventual aftermath in 1998, three years before September 11th. 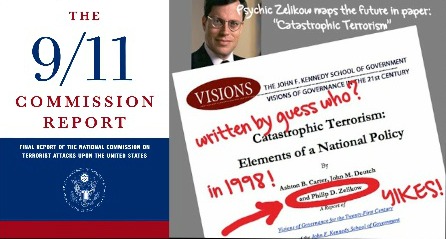 In an article entitled "Catastrophic Terrorism: Tackling the New Danger," written for the Council on Foreign Relations' Foreign Affairs in November 1998, Zelikow and co-authors Ashton Carter and John Deutsche ask readers to imagine a catastrophic act of terrorism like the destruction of the World Trade Center. "Like Pearl Harbor, the event would divide our past and future into a before and after. The United States might respond with draconian measures scaling back civil liberties, allowing wider surveillance of citizens, detention of suspects and use of deadly force. More violence could follow, either future terrorist attacks or U.S. counterattacks. Belatedly, Americans would judge their leaders negligent for not addressing terrorism more urgently.”

Zelikow's amazing prediction becomes somewhat less remarkable when we learn his own self-described expertise in the creation and management of "public myth." In a separate 1998 article on public myths, Zelikow identifies "generational" myths that are "formed by those pivotal events that become etched in the minds of those who have lived through them," before noting that the current set of public myths, formed during the New Deal in 1933, are currently fading.

Convenient for Zelikow, then, that the "Pearl Harbor" event that would define the next "generational" myth, known as the "War on Terror," would arrive just three years later, and that he would be in charge of the commission tasked with creating and managing the public perception of that myth.

Indeed, given his central role in the cover up of 9/11 and deflecting concern away from legitimate 9/11 suspects, any true investigation into the events of September 11th would involve a thorough interrogation of Philip D. Zelikow.

Did you know that a third World Trade Center fell with the other two skyscrapers?  Based on the research and scientific information by Architects and Engineers for 9/11 Truth, there were three steel-framed buildings that collapsed on Sept. 11, 2001.  The little known destruction of the third building was WTC 7, across from the famous two skyscrapers that fell that same day.  It looked like a controlled demolition job because of the unmistakable smooth, symmetrical downward motion.  It only took 6.5 seconds for this 47-story building to collapse to the ground.  Why did it go down?  It was not hit by a plane and normal office fires could not have brought it down.  Over 2,000 architects and engineers call for a new Building 7 investigation. 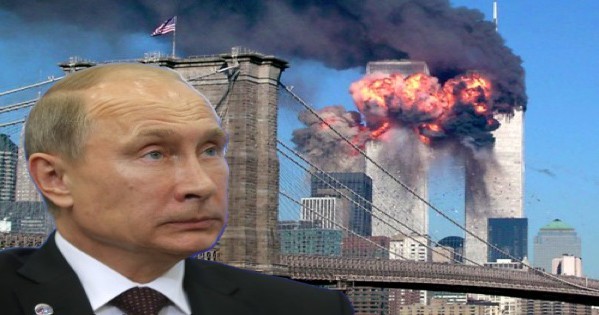 2014: Russia Presents Evidence Against US, UK and Israel as Being the Actual 9/11 Terrorists

Russian President Vladimir Putin released classified information that were data dumps on 9/11.  He did this as retaliation against the U.S. (CIA) and U.K. (M16) for interfering in his takeover of Kiev.  It was his way of creating Internet warfare.

Here are highlights of what really happened, according to intelligence reports from Russia:

- Nuclear devices used were a modified version of the W-54 nuclear artillery shells (called nuclear pits) that were covertly provided to the Israelis between 1988 - 1998 from U.S. surplus stockpiles illegally exported during the Bush/Clinton administration;

- Based on chemical analysis of the fallout at ground zero, it's confirmed that nuclear weapons were used.  A chemical/radiation fingerprint of the warheads were captured;

- Only a 2 kiloton device was needed to drop the buildings.  Radiation would drop to acceptable levels within 72-hours;

- The Saudis have a stash of W-54's acquired from the U.S. under George Bush.  The Israelis have provided them to India, Brazil, China, Taiwan, Japan, North and South Korea;

- And, the primary purpose of the nuclear weapon used on 911 was to produce a massive Gamma ray/neutron flux that would vaporize about 150 to 300 feet of 6 inch thick steal I-beams that constituted the central core of the World Trade Center buildings. This created a free fall event as seen on TV that day.  The flash would be hidden from sight due to the underground detonation.  Most of the light was in the non-visible light spectrum any way.  The fallout would be mainly vaporized concrete cement and iron oxide. This is why after 911 they told everyone on TV that the beta radiation burns that people were getting were due to the caustic cement dust and not due to the radiation effects from the radioactive cement fallout. 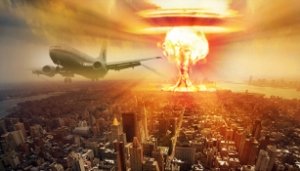