Synopsis: Selected by "Conscious Movie Reviews," Black Panther is an action and adventue, superhero drama.  After the sudden death of his father, T'Challa was next in line to the throne to be the new ruler of Wakanda, an isolated nation within Africa that's technologically advanced from being enriched by Vibranium from a meteor crash.  It is prized for being the strongest element in the Universe.  Faced with opposition from within his royal court by a traitor who brokered with Ulysses Klaue, a South African black market arms dealer, and his American ally, Erik "Killmonger" Stevens, he relied on his all-female secret service, the hi-tech wizardry of Shuri, and former girlfriend, Nakia, to stop them.  When Killmonger showed up at the Wakandan border to stake his legitimate claim to the throne, T'Challa accepted it - threatening his ability to protect his family and all Wakandans as the Black Panther. 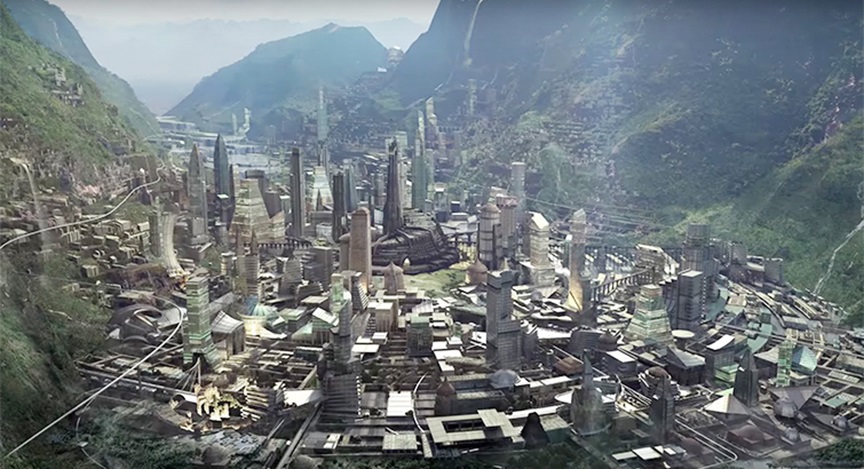 After the death of King T'Chaka from an explosion at a U.N. gathering, T'Challa had reservations about taking his father's place as Wakanda's new leader.  He would be fully responsible for protecting their isolated and technologically advanced country that's powered by Vibranium - the strongest element in the Universe, deposited by a meteor that crashed on their lands.

Huge reserves of Vibranium were mined by the Wakandans for centuries to access its unique properties of absorbing all vibrations, including sound and kinetic energy, then redistribute them.

The meteor crash was outer proof that the Wakandans were being divinely gifted.  When you are chosen to be the true guardian of a valuable resource, it's because of your huge capacity to physically and spiritually embody its powerful life force in an ethical way.

As a metal of extra-terrestrial origin, Vibranium can represent our collective shift to evolve beyond the Age of Metal from centuries of living in a "metal consciousness" that has lead to rigid, closed-mindedness, and resistance to new ways and ideas.

Radiation from the element had affected the local flora and fauna to produce a heart-shaped, flowering herb, indigenous to Wakanda only. 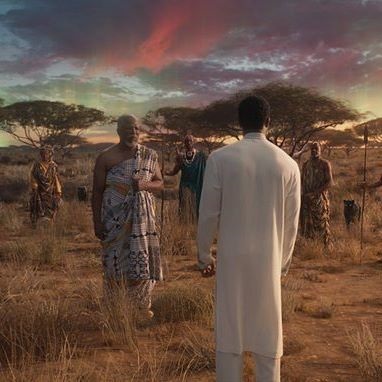 At the coronation ceremony, T'Challa followed tradition by accepting any challengers to the throne.  M'Baku, leader of the nearby mountain tribe, came forward to do ritual combat with him.  In a near-death fight, M'Baku's life was spared.

As the rightful leader of Wakanda, T'Challa drank the Vibranium infused liquid by Zuri, keeper of the flowering herb, to receive the super-human powers of the "Black Panther."

Black relates to how the color can absorb all colors, similar to how the Wakandans prefer to be inclusive towards other tribes and races.  "We all have red blood" is a saying from the Xhosa tribe of South Africa to explain our common root.

As a Spirit Animal, the Black Panther's medicine is about challenging you to overcome the fears held within your shadow.  It's for T'Challa to come face-to-face with who he really is.  Black Panther's essence can help you draw from the power of mysticism to unleash the truth and the safety of darkness.

Acknowledgement of his rule was made complete when T'Challa was given the potion again in a private ceremony that evening.  He was covered in red sand, then went into a trance to receive wise counsel and blessings from his father in the ancestral/spirit realm.

Sand can symbolically represent the impermanence of physical life. Its red color relates to blood relations who have passed on from this Earthly world.  The flowering herb was a "gateway plant" that allowed T'Challa to go into a trance state, then soul travel to another dimension full of trees, symbolic of his roots, or ancestry - a safe harbor created by his elders for T'Challa's spirit to return home. 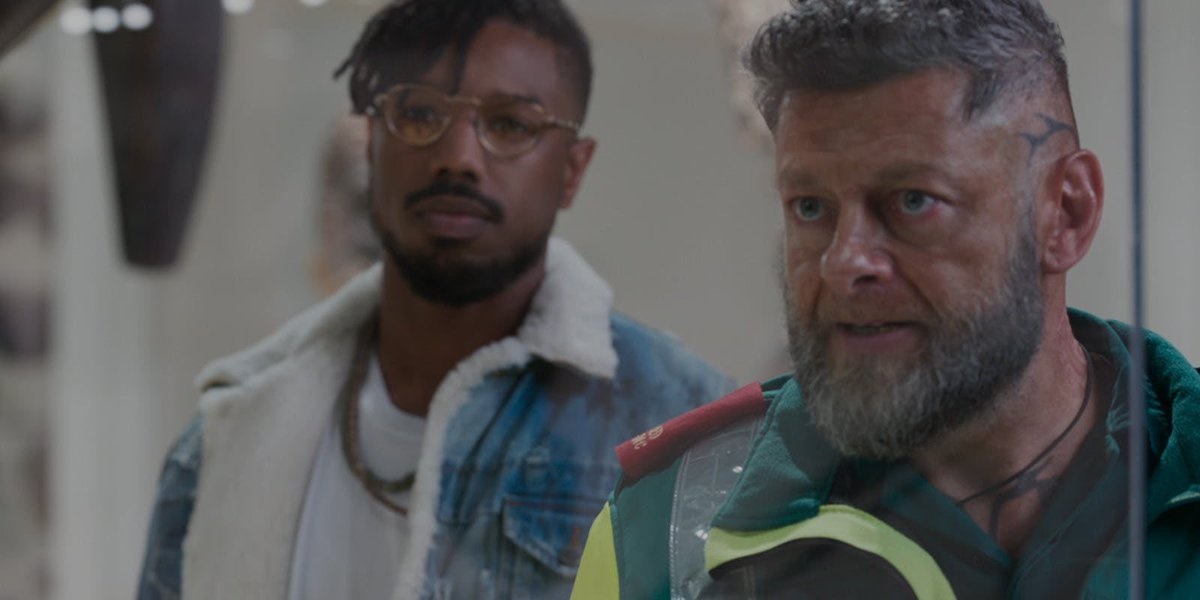 Nakia, the ex-lover of T'Challa, recommended that Wakanda no longer be an isolationist country, but to share their resources through foreign aid and a refugee program.  His younger sister, Shuri, only saw problems with that ideology.

W'Kabe, who served as head of security to be the first line of defense for Wakanda, was the traitor within the royal circle.  He left their country vulnerable to attack from having secet dealings with Ulysses Klaue, a South African black market arms dealer, and his American ally, Erik "Killmonger" Stevens.

T'Challa relied on Nakia and Okoye, head of his all-female, special forces team, to foil the transfer of a Vibranium artifact from Klaue to CIA agent Everett Ross at a casino in South Korea.

Surrounded by strong, capable women, T'Challa took a holistic approach to leadership that was not like the top-to-bottom style that looks like a triangle, but more circular to form collaborations for a shared purpose.  Collaborative Leadership is a style that works well for the 21st century because all voices are heard to be cooperative, democratic and transformational that's preferred by many women in the digital age and global society we live in.

Klaue was captured and placed under interrogation.  Killmonger blew a bomb from outside of the building.  In a firefight, Agent Ross was badly injured from trying to protect Nakia.  Klaue escaped with Killmonger, then killed by him. 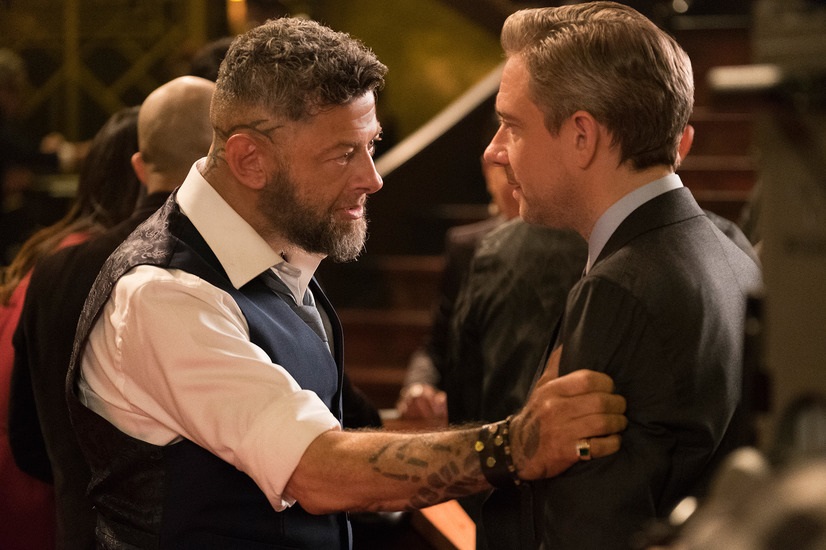 Agent Ross was placed under the care of Shuri at her lab to heal his spine injury with Vibranium.  She had serious reservations about his being there, jokingly calling him a colonialist.  He recovered quickly to be able to stay in Wakanda and marvel at their advanced technology.

Shuri was right in being guarded around Ross because of his ties with the U.S. government who employ jackals - "Economic Hit Men" who convince heads of state to adopt economic policies that impoverish their countries.  According to John Perkins, a former "Economic Hit Man," the U.S. is a corporate empire, protected and supported by the U.S. military and the CIA.  He warned that their current "hit list" is targeting U.S. and European cities using a combination of debt, enforced austerity, underinvestment, privatization, and the undermining of democratically elected governments.  The current immigration problem, explained Perkins, is really a trade agreement problem.

Many years of Neo-Colonialism has left African countries independent, but only in theory.  Their economic system and political policy is really directed from outside of them by an imperial power.  The only way to reverse the damages is through the practice of African Unity.

T'Challa learned the truth about Erik "Killmonger" Stevens from Zuri.  He is the son of N'Jobu, brother of King T'Chaka.  Erik's father was on assignment in America, but became radicalized.  His intent was to transfer Wakandan technology for oppressed Blacks around the world to conquer their enemy.  In a fight, N'Jobu was killed by King T'Chaka, leaving the boy behind as part of a coverup.  Living in Oakland, California, Erik become a dangerous, U.S. black ops soldier with the adopted name of "Killmonger."  He was trained for both combat and taking down governments, fulfilling his intent to overthrow T'Challa from years of resentment.

It was more than coincidence that the comic book creators of "Blank Panther" chose Oakland, California as the site where Killmonger was raised.  The superhero was introduced, several years before the Black Panther militia group started their national movement from the same location to fight white oppression in America. 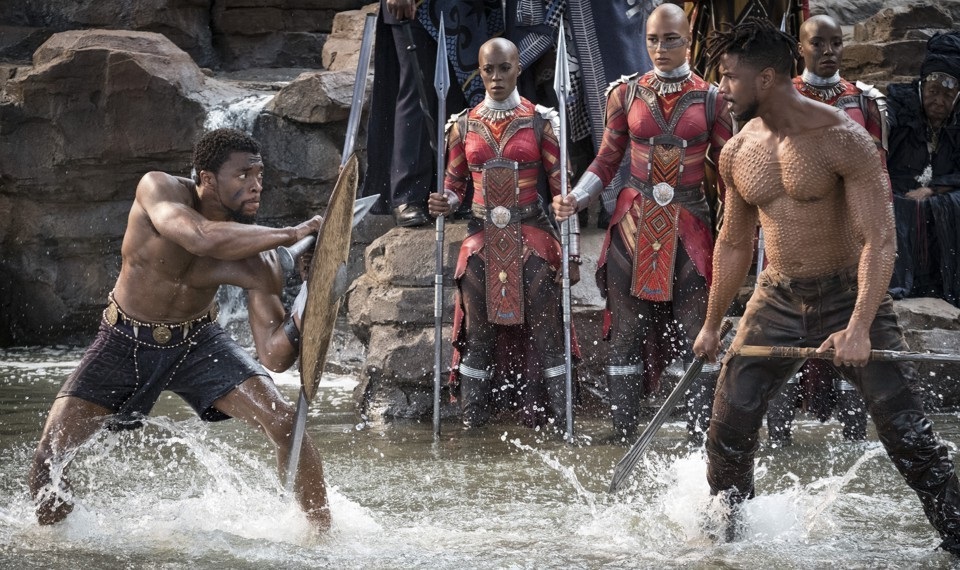 When Killmonger showed up at the border of Wakanda with the dead body of Klaue, he revealed his true identity before the tribal elders in order to stake his claim to the throne through ritual combat.

T'Challa accepted his challenge, only to be defeated by being thrown over the waterfall.  Killmonger took over as the new ruler to drink the Vibranium infused drink.

By drinking it again that evening, Killmonger connected with his father, N'Jobu, in the ancestral plane that resembled his apartment in California to hear him say, "You may not be welcome.  They will say you are lost..."  He awoke from the disturbing message to order the flowering herbs to be burned.  Only one was saved in secret by Nakia.

Erik was a Wakandan by birth, but not in spirit from feeling alienated.  He identified more with self-pride that was from his own accomplishments, rather than tribal affiliation.  Like an American, Erik was encouraged to be fiercely independent, instead of interdependent in a healthy way with others out of shared strength, especially with women who know how to hold their own power well.  He was denied the influence of elder wisdom to not know what is ancient and sacred.  And by being locked out of Wakanda, he had no sense of guardianship of the Earth's resources to exploit it.

Killmonger was militarily trained to divide and conquer - a means to destabilize any country.  By arming his "war dogs" with Vibranium weaponry, they could wage attacks against their White enemies.  It was not the Wakandan way, so T'Challa's family left immediately.

This is a case of how the oppressed has now become the oppressor because whatever you resist, you'll become.  Killmonger's use of divide and conquer methods on the Wakandans was similar to how the American government had created a racial divide through institutional racism, building ghettos, and encouraging black-on-black crimes.  He also violated a basic, spiritual understanding that freedom is gained through responsibility.  They go hand-in-hand.  Shortcuts can't be taken, so waging rebellions won't work.  You must accept greater responsibility to earn more freedom. 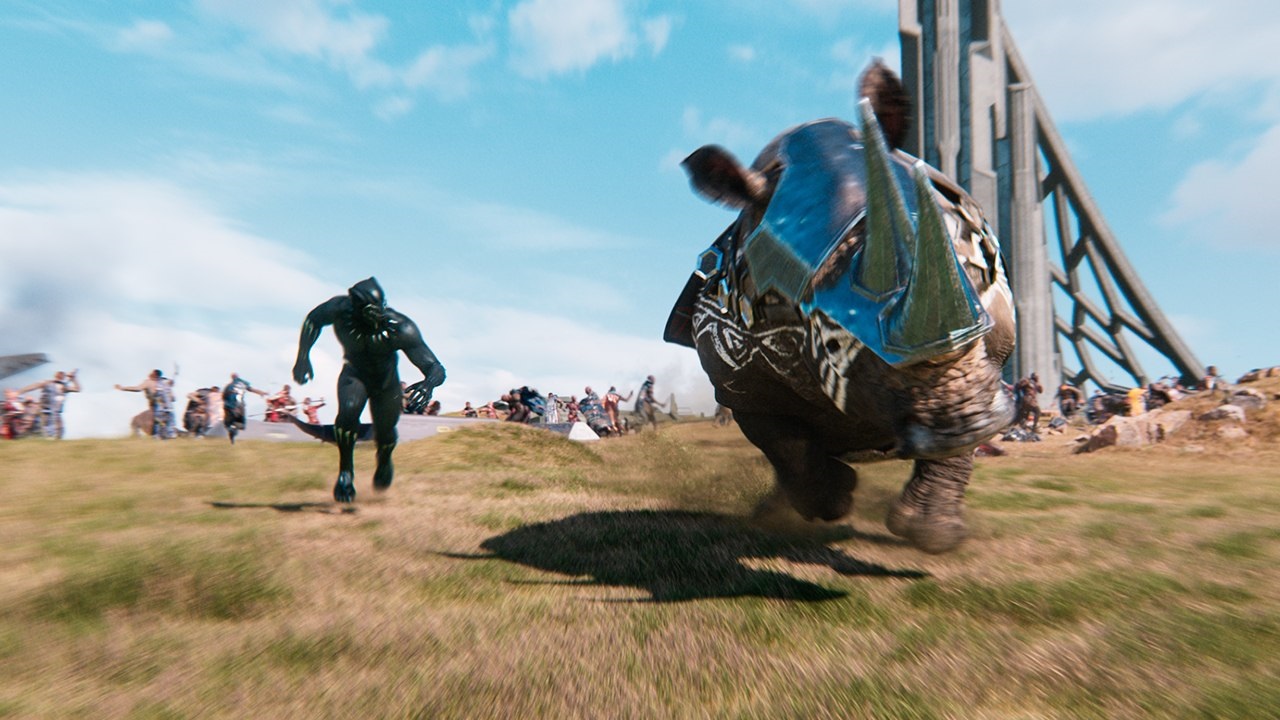 When T'Challa's family fled for safety and help from M'Baku and his mountain tribe, he lead them to see T'Challa in a coma.  He was given the remaining, Vibranium-infused drink to fully recover and become the "Black Panther" again.

For every medical problem, there is an emotional side to it.  Based on the teachings of Inna Segal of Visionary Intuitive Healing, being in a coma is about not wanting to be here - needing to escape for fear of the future.  T'Challa's comatose state was a match for how he was in a no-win situation from giving up his rule to Killmonger because of the consequences for his people.

Black Panther returned to Wakanda as Killmonger was sending off the Wakandan airfleet that held cargoes of Vibranium arms to war dogs around the world.  Agent Ross was helpful in remotely taking down some of the ships.  On the ground, it was an all-out civil war that included the battle rhinos released by W'Kabe.

Choosing the rhino as a spirit animal can take you on an journey in search of ancient ties and have love for yourself to be alone and be well with your aloneness.  By using the rhino for attack on his people, W'Kabe charged as a loner to break ties with ancient wisdom for selfish gain. 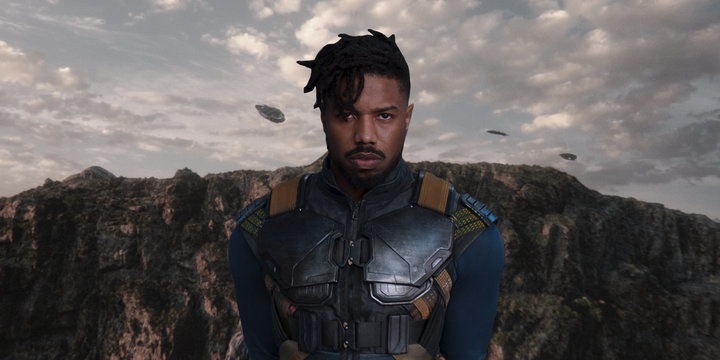 Killmonger was near death from a wounding by T'Challa.  He was offered to be saved, but refused the help by saying, "Bury me in the ocean.  Ancestors knew death was better than bondage."

In truth, Earth is a slave planet where we're all subject to many layers of karma that must be worked through.  The real freedom we seek is by taking the middle path to see beyond the illusions of this world in a detached, yet loving and compassionate way.

When King T'Challa took Shuri to the apartment complex in Oakland, California where their uncle was killed, he surprised her with his plans: the property had been bought to be turned into the Wakanda Center for Science & International Exchange that she would head.  It was his way of balancing the scales of injustice to affect his family on both sides, those living and in the ancestral realm.  T'Challa atoned for Killmonger's exclusion because all must be honored and respected and given their right place within a family for love to flow again.

The Science Behind "30th Century: Escape"