Synopsis: Selected by “Conscious Movie Reviews,” “Independence Day: Resurgence” is a sci-fi film. Twenty years after the first alien invasion, humans on Earth have prepared themselves militarily for the possibility of another one through reverse engineering alien technologies.  A second mothership about 3,000 miles wide has landed and they've brought their queen. Their goal: destroy the Earth's core. Like before, it's a fight to prevent the annihilation of Earth and all of its species. This time, the humans have help from benevolent aliens.

It's been twenty years after the first alien invasion that wiped out 3 billion of the Earth's population. Nations have collaborated to form a global defense and research program called ESD that stands for Earth Space Defense. In preparation for another invasion, military defense stations were placed on the Moon, Mars and Rhea, the second largest moon of Saturn.

Unity through Adversity is typically what happens between humans under major crisis. It can take something big to happen like the systematic elimination of your species and home planet for everyone to bond together as "one heart." This is when we can collectively experience tremendous spiritual growth from having been "stripped" bare to reveal our spirit of strength and resilience. We can also expand our hearts to a universal love for humanity. This supports the inner experience of having nothing and finding bliss.

Congolese warlord Dikembe Umbutu and his resistance group were the keepers of an intact alien destroyer. They held special knowledge on how to physically defeat the aliens through years of one-on-one combat with them.

Ancient civilizations and tribes like the one headed by Umbutu are examples of alien-influenced cultures. The most famous relationship is between the Egyptians and Pleiadian race from the Orion Belt.

Besides Umbutu, former U.S. President Thomas Whitmore, ESD Director David Levinson and Area 51 scientist Dr. Brakish Okun received distressing feelings, telepathic images and writing in the form of logograms from the aliens. They had a strong, intuitive sense of another invasion coming. This was confirmed when an alien mothership 3,000 miles wide appeared to destroy the defense base on the Moon and then headed for Earth to do more damage to the Earth's core.

In the 1980s, Scientist Rupert Sheldrake proposed the idea of a Morphogenic Field that surrounds all beings. It's an energetic field that can connect groups of people. Anyone can tap into this field to access their holographic properties of memory and telepathic communication. We can stay in touch with others who are miles, other dimensions, or even galaxies away.

The powerful, high-tech weaponry and aircraft used by the military were reverse engineered from salvaged alien technologies. When a spherical ship emerged at the defense station on the moon through a wormhole, they forcefully attacked it, only to later regret the move after learning that the craft came from a benevolent extra-terrestrial race that was a threat to the alien invaders.

The Roswell UFO incident in New Mexico helped to usher in a new era of developing anti-gravity aircraft during the 1950s. Universities, large corporations, and all the aerospace companies in the U.S. and abroad found practical uses from the materials taken from the crashed alien aircraft.

Colonel Phillip Corso revealed in his book, "The Day After Roswell" that he was assigned to "seed" large corporations with the alien technology and then have the companies take out patents on them. This lead to great innovations with the introduction of fiber optics, resistors, night vision equipment, bullet proof vests made of kevlar, high-energy lasers, particle beam weapons, Nitinol metal with memory, and much more.

The Law of Similars in Homeopathy

During the first alien invasion twenty years ago, David Levinson came up with a brilliant idea to defeat the aliens by planting a computer virus that would deactivate their shields, rendering them vulnerable to nuclear missile attacks.

This is a good example of the Law of Similars used in Homeopathy. It's based on the idea of like heals like. When you use minute doses of a natural substance to encourage the symptoms of a disease, the body will naturally defend itself by creating an immune reaction against it - very similar to fighting a fever with a fever.

To combat against the aliens during the second invasion, David Levinson copied the signal from the spherical ship of the benevolent aliens as a decoy to lure the queen from her ship to a trap filled with fusion weapons.

As the first female U.S. President, Elizabeth Lanford headed a technologically advanced military that had trained women pilots fighting against the alien queen and her army.

The women in the film expressed positive masculine qualities of courage, assertion, strength and protection.

As for the alien queen, she was the epitome of the Wounded Masculine through her need for dominance, confrontation, aggression, control and abuse of power.

For women to achieve true wholeness and power within, they would have to reclaim their feminine nature, but also their masculine energies in balance with each other. This principle applies to men too.

Intent on grabbing the white sphere, the alien queen resists attack by throwing up a force field emanating from her biomechanical suit and receiving protection from the alien army. The fighter pilots had to act fast to break down the queen's defenses. They were minutes away from the alien mothership reaching the Earth's core for destruction.

As the aliens swirled to create a shield around their queen, they exhibited eusocial, also called communal behavior. Visually, they moved like a bee colony swarming. This is where thousands to tens of thousands of bees fly together to establish a new nest. The chaos from looping in a circle is done to create a veil that can keep anyone from knowing which bee is the queen.

After successfully defeating the alien queen, Dr. Okun shared some good news: the sphere had offered them new technology for interstellar travel in preparation for the resistance to take the fight to the aliens.

Rosin Wernher von Braun, the creator of the Saturn V Rocket that allowed the Apollo 11 crew to travel to the moon, was vehemently against the weaponization of space. Technology, he believed, should be used to solve the problems of the planet. Before his death in 1977, von Braun warned of officials creating a spin to find an enemy to build these weapons systems. First it was the Russians, he explained, then it'll be the terrorists, after that, the rogue nations, asteroids, and the last card would be the extra-terrestrial threat.

In 1997, the B-2 Stealth Bomber was introduced. It eerily resembled the alien aircraft spotted by private pilot Kenneth Arnold while flying nearby Mount Rainier in Washington and Adolph Hitler's glider called the Horten Ho 229 in 1944.

Taking a revealing quote from a graduation speech at UCLA's School of Engineering given by Ben Rich, the Father of "Stealth Technology," he said, "We already have the means to travel among the stars, but these technologies are locked up in black projects and it would take an act of God to ever get them out to benefit humanity...Anything you can imagine, we already know how to do." He also mentioned that through his Skunk Works company, "The U.S. Air Force has just given us a contract to take E.T. back home." 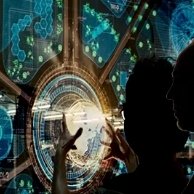 What Do You Mean the Third Dimension is Going Away?