For Beyond 50's "History" talks, listen to an interview with David Sehat, a historian.  He'll explain about The Jefferson Rule - the unspoken conviction that any proposal or policy must be associated with and justified by the Founding Fathers — is a fact of American politics.  Liberals, conservatives, radicals, and libertarians alike look to the founding moment to justify their policies.  Our debate over the Founding Fathers is flawed in one crucial way: The Founders were not united and did not speak with one voice.

When contemporary politicians use phrases such as “what the Founders intended,” they are calling on a querulous and divided group that did not and cannot offer the singular guidance that we might desire.  Beginning with the early national debate between Thomas Jefferson and Alexander Hamilton, continuing through the Civil War, the fight over the New Deal, and the Reagan Revolution, up to the disputes between Barack Obama and the Tea Party, Sehat will show that political consideration of complex issues has been reduced to asking: What would the Founders do?  That oversimplification obscures the real issues and has damaged American politics. 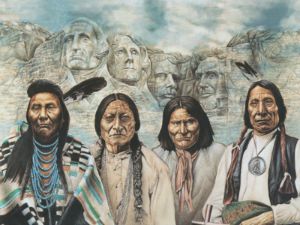 The five Native American tribes that formed the Iroquois Confederacy of the Eastern United States were self-governed by democratic laws rooted in natural and spiritual principles of social equality, peace, effective diplomacy, along with unity and strength as a confederation of peoples.  Their system of laws influenced the colonists in the drafting of the Revolutionary America's Albany Plan, the Articles of Confederation, and U.S. Constitution.

A Right to Bear Arms