Hidden Meanings within the Movie,
"Ghost in the Shell" 2017 (Spoilers)
Reviewed by Joy Ramos Davis

Synopsis: "Ghost in the Shell" is a live-animation, sci-fi, action and adventure film, based on the popular manga comics of the same name.  It follows the life of Major, a cyborg with a cybernetic shell and fully-functioning "ghost" that is her mind.  She was designed by Hanka Robotics for fighting the world's most dangerous cyber-terrorists at a city bureau called Section 9.  Major must stop Kuze who has been "ghost hacking" into people's minds, while searching for her true identity from seeing past memories that haunt her.

"Ghost" as Mind or Soul

Welcome to "Conscious Movie Reviews," I'm your host Joy Davis and here to review the action and adventure sci-fi, "Ghost in the Shell."  Special thanks to Mystic Healer Sonja Grace for her insightful contributions.

As the sole survivor of a cyber-attack on her family, Mira Killian's brain was preserved by Hanka Robotics to be integrated with a cybernetic "shell" for a body.

It involved a complex layering and immersion process.  One of the doctors declared it a success because her "ghost" was still in there.  After many failed attempts, Mira became the first cyborg ever created by the company.

The film, unfortunately, equates the "ghost" with the mind, as if that was our true essence.  We're both human and divine with consciousness that connects all of us and everything to the Universe, or Source.

The layering process is similar to our makeup of having inner, spiritual bodies surrounding our physical shell and imbued by Life Force energies (also called Chi) with frequency, wave and vibration.  We're jokingly just vibrating bags of mostly water.

Taking a quote by famous physicist Nassim Haramein, he pointed out that "looking for consciousness in the brain is like looking inside a radio for the announcer."  It's not a construct of the mind as many scientists confuse consciousness with self-awareness. 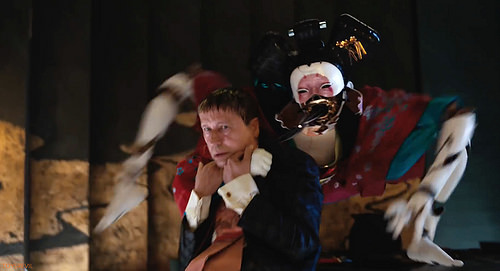 Mira was a weaponized product of the company, designed to work for Section 9, an anti-terrorist bureau to take down the world's most dangerous cyber criminals.  She earned the rank of Major within a year.

Run by technocrats, Hanka Robotics treated individuals as corporate property. They also reflected the ideals of Transhumanists who want to create a post-human society with enhanced physical and intellectual abilities.  They intend to extend human life, far beyond normal - a technological quest for immortality.

On duty, Major descended from a building naked to infiltrate a Hanka business conference under terrorist attack by gunmen.  She was warned by Chief Aramaki of Section 9 not to do it.  With backup help, Major managed to subdue a murderous, mechanical geisha that was hacked into by Hideo Kuze, the most wanted cyber criminal.

Preferring to operate without clothing, Major reflected her need to be a free spirit, both in appearance and how she can act independently of authority.  Because of her synthetic body, she's also showing us that we'll eventually need to detach from our physical selves.  When she disappears using the thermoptics built into her shell, it represents Major's "ghost" form.

At Hanka Robotics, Major did a deep dive into the corrupted, internal systems of the geisha - again without permission - to find Kuze.  She was under cyber attack with many bodies hacking into her as Major got the information needed; Kuze was at a nightclub.  Her dive was terminated at once as a rescue attempt.

Heading for the location with fellow operative, Batou, they battled with the manager and security in the back room.  It ended in an explosion that left Batou blind.

Back again at Hanka Robotics, Major complained about the glitches.  Dr. Ouelet shared her concern that Major's "shell" can be repaired, but not her mind.  "You are what everyone will become one day,"  she added.

Seeing our human selves as flawed is an ongoing dissatisfaction.  Altering our "shell" to become cyborgs is about wanting control that stems from this dissatisfaction.  What we ultimately want, according to world renowned Mystic Healer Sonja Grace, is to alter our reality, our consciousness, not bodies.  It's not about form.

Batou's eyes were replaced by cybernetically-enhanced ones to give him x-ray and night vision. 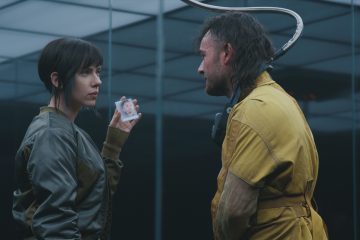 Based on intelligence gathering by Section 9, Kuze was Project 2571 at Hanka Robotics and tied to recent deaths of scientists from the company.

When two garbagemen used their work truck to ram a car with a Hanka scientist within it, Major and Batou foiled their attempt.  After chasing down one of them, the other was brought in for questioning.  His mind was hacked into by Kuze for control and installed with artificial memories to believe that he had a wife and daughter.

This is a good example of how our memories are synthetic and not fixed.  Every time we access a memory, we rewrite it.  The subconscious part of the mind is a very sophisticated recording device of our inner and outer experiences, using images as its language.  It can be out of alignment with our conscious beliefs and usually is.  Self-sabotaging beliefs behind memories that are held in the subconscious can be changed.  A simple method to use is called PSYCH-K. 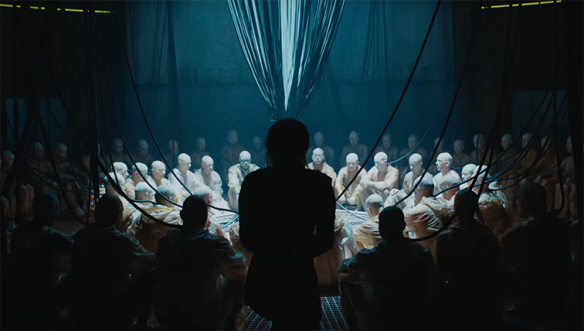 Scouting a new site, Major noticed a faint vision of a girl being taken away. She explored some more to discover a group of men in a circle wired together to form a network for Kuze.

Symbolically, they represented the collective consciousness, a repository of everyone's thoughts and intentions.  The men in the circle were used and abused by the system to create their own version of the alternative, dark net.  Through the internet, we are collectively one mind, but not one heart.

Kuze showed up for her benefit to reveal that they are so much alike as products of Hanka Robotics.  He was their failure that escaped.  His "ghost" resisted the shell - a fight between matter and spirit.  Kuze warned her not to take their medications that can suppress her memories.  Your ghost is yours, he explained.

Seeing a memory of her former self reveals that our cells hold cellular memory in an energetic way.  Cellular memory is the complete blueprint of your existence - like a hologram that can be accessed through the subconscious mind.  According to Mystic Healer Sonja Grace, she teaches that within each cell, the Soul self merges throughout the body.  Cellular memory not only dials us into this lifetime, but past lives as well.

Major learned from Dr. Ouelet more of the same truth that disturbed her.  She was an experiment made successful and given false memories.

Major went offline to dive into nearby waters.  When Batou asked what it's like, she described it as cold and dark.  No voice. Nothing.  It felt real to her.

Diving allowed Major to experience herself as Soul that's flowing and expansive.  A kind of meditation, she disconnected from the noise of the collective consciousness to draw from Source that is silent.  It's an unspoken sound of vibratory currents.  You too can listen to the Voice of Silence by quieting your mind to have inner peace and knowingness beyond thought.

Cutter, the CEO, demanded that Major be euthanized because she knew too much.  Dr. Ouelet resisted and was shot in the heart for helping her to escape.  By branding Major a terrorist, Cutter then gave Chief Aramaki orders to terminate her by any means necessary.  He also refused.

For technocrats, technology is their religion.  They worship the mind and destroy the heart.  You are not, to them, an independent being.  By cutting off your ability to feel, they want you to follow their orders on command, making you believe they're your own motivations.

Following the address given by Dr. Ouelet, Major met her mother to learn that her real name is Motoko Kasanagi.  She died a year ago after running away to stay in the Lawless Zone with rebel friends who rejected technology because it was destroying the world.  The truth for Major was too much to take, so she left with a promise to see her mother again.

Earlier at her mother's apartment, the cat recognized Major, even though she was physically unrecognizable.  This was a good way of showing how pets can be highly sensitive to recognizing our energies, which still embodied Major's synthetic form because our Soul energy is our distinctive blueprint. 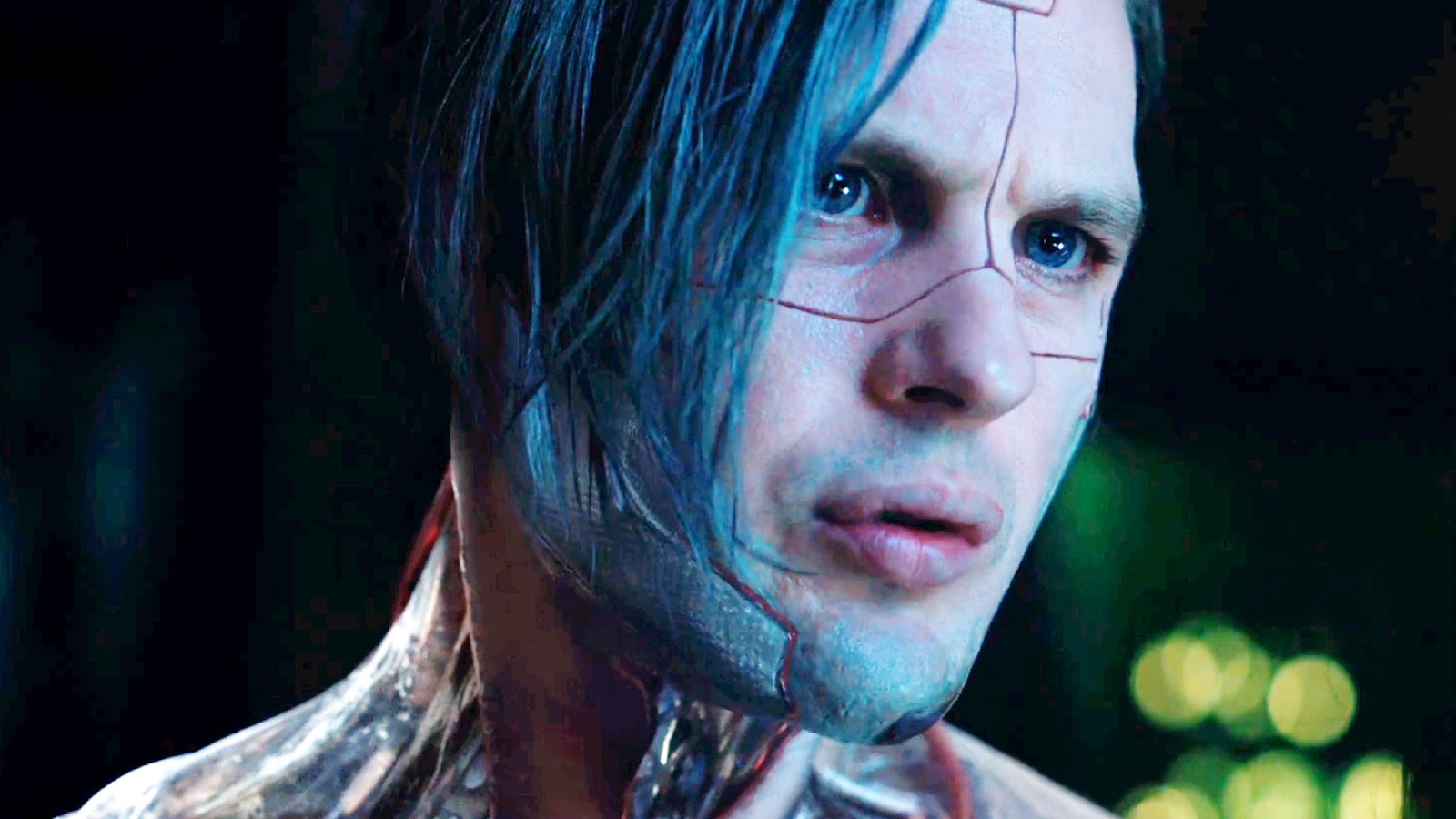 Targeted by Cutter's men, Chief Aramaki defeated them with his powerful, six-shooter.  Who he is and his choice of using an older style gun symbolized the times he came from that prized authenticity.  The Chief was more willing to trust in something tried and true from knowing what's real and not real anymore.

Major headed for the Lawless Zone and found Kuze there.  More memories of her tragic past returned to realize that they were together before as a family of runaways, then forcefully abducted by Hanka Robotics for experimentation.  He invited her to go with him into his network and evolve together.  She just wasn't ready to leave.

When a spider tank, deployed by Cutter, showed up to fire at them, Major tore at the tank's motor, but lost her arm doing it.  Kuze fell to his death after getting shot from the helicopter above.

In a heated confrontation, Chief Aramaki gunned down Cutter after receiving Major's consent to do that.  She finally received full closure from the whole ordeal with her mother by visiting Motoko's burial site together.

Major came to realize that deeds, not memories, are what define us.  In truth, there is greater value to being over doing - the opposite of Major's personal truth because discovering who we truly are as Soul, that's beyond the mind, to operate from our beingness, can more accurately define who you are.