For Beyond 50's "Finance" talks, listen to an interview with Dr. Stanley Riggs, a wealth manager. He'll talk about the four reliable and readily accessible economic indicators that will help you to know where the economy is going this year.  Whether you are investing in stocks, bonds or real estate, you can benefit from these cyclical changes by understanding economic cycles for your investment decision-making process.  By always knowing where you are in the cycle, you can anticipate and benefit from future economic, cyclical changes and build your wealth.

Riggs teaches the tools to build wealth, as well as advising that the monies accumulated through careful investing be responsibly and strategically spent.  This is to encourage living an enjoyable life with rich memories by converting the money to do "fun stuff", rather an being rich with broken dreams, he explained.

According to Riggs, he recommends four very reliable indicators of an economic cycle's "booms" and "busts."  They are for the short-term perspective and required weekly reading.  If you prefer a long-term, broader perspective, take a look at the demographic Spending Wave and reviewed semi-annually.

Based on the economic cycles, Riggs pointed out that "It is almost impossible to determine the actual inflection points (the top or bottom of the curves), but it is critical to have a clear understanding of which side of the curve you are on and which inflection point you are approaching." 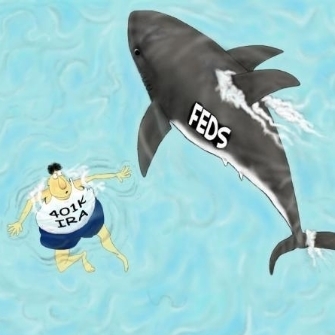 Dark Forecast:
The Coming Redistribution of Your Wealth

A good reason for why Riggs recommends that you spend your hard-earned, investment wealth is to enjoy your life before the money accumulated in your private retirement program (401(s), IRAs, Roths) will eventually be taken away by the federal government to institute a "Fair Retirement For All Plan" that would fund the bailout of underwater union and municipal retirement plans that represent millions of votes.  This is especially disconcerting for those who plan to retire with more than $300,000 in their retirement account.  Riggs calls it the "let's be fair and make everyone equally poor" philosophy by the government.

"I believe the IRA/401(k) Roth plans were established mainly for the benefit of large corporations, Wall Street money managers and the U.S. government.   I also see the benefit of the $11 trillion voluntarily saved, and - so far - untaxed," wrote Riggs in his book, "Build Wealth & Spend It All: Live the Life You Earned."

Trouble with the IRS